Parenting:  Choosing To Be An Adult 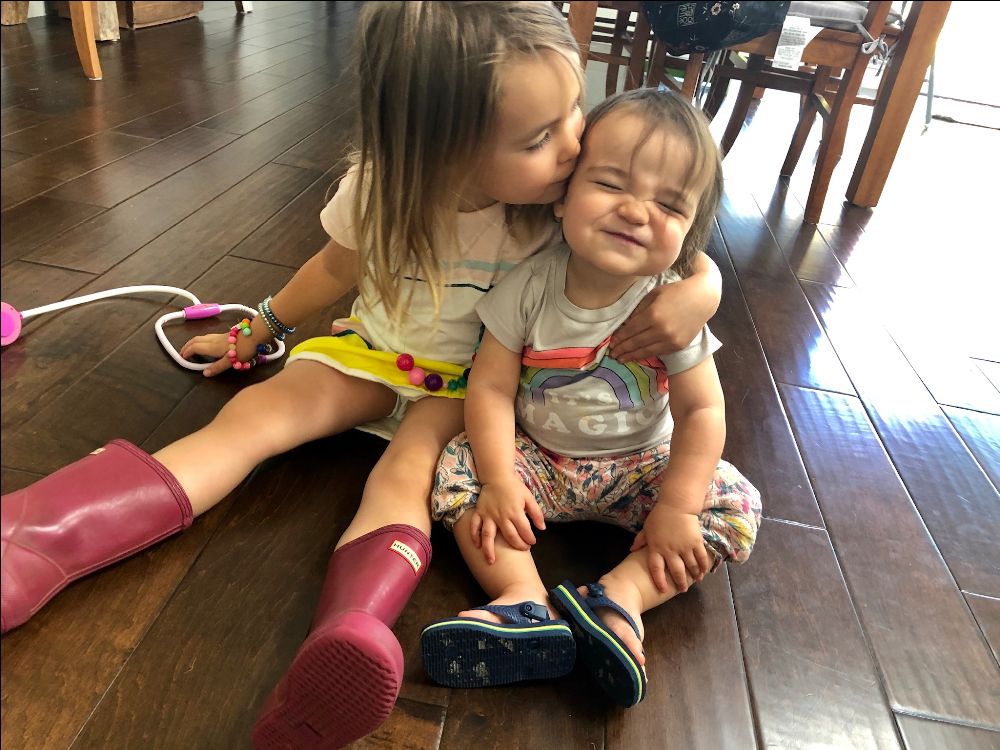 Above:  They really do love each other...I think... Both of the scenarios below have followed in real life in my own house:

“Uggh this again?!?!  Can’t I get a little break for once?” I groan to myself.  “STOP IT!”  I yell.  They both stop and look at me for a second.  Then both burst out crying.  Both of them.  Giant tears.  Giant sobs.  I scared them.  I made it worse.  “I’m a terrible person,” I think to myself.  Out loud I say in a harsh voice to my 4 year old, “You are annoying your sister on purpose!  We’ve talked about this before.  Go to your room now!”  She is still crying.  “Nooooo!  I promise I’m sorry I’m sorry Mommy!” The toddler is still crying too and I’m trying to pick her up.  She doesn’t want me.  She is inconsolable.  I think to myself, “What a mess!  Why is this happening to me?  She [my older kid] is a menace!  She’s ruining everything!”  Everyone is falling apart.  Even me.

“I know how to deal with this.  I’m in control of how this turns out,” I say to myself.

“Hey!  [To my 4 year old in an even but stern tone].  The toddler is still crying but the 4 year old stops talking.  “We don’t use our words that way.  Your sister doesn’t like that and she’s asking you to stop.  If you have energy and want to use your voice you can go to your room and sing as loud as you want.  Or… [in a whimsical tone] if anyone else has another idea I’d love to hear it.”  I look all around the kitchen pretending to see other people.  I wait.  The toddler is calming herself down and has stopped bawling.  She’s just sitting there with wet tear-streaked cheeks and puffy eyes.  Watching her sister and me.  The 4 year old raises her hand eagerly.  “Yes?”  I ask while wiping away my toddler’s tears and kissing her forehead.  “Or doing 10 jumping jacks” the 4 year old offers.  “What a great idea?!” I exclaim.  “Would you like to do that with me?  Maybe your sister wants to do it too!”  And together the 3 of us do 10 jumping jacks…or what actually looks like some sort of Zumba routine gone wrong.  Everyone’s laughing now.  I feel confident in my parenting.  “I can do this!”  I think to myself.  And my theme song [Indiana Jones] plays in the back of my mind.

I used to hum that song out loud all the time.  While I wandered the halls of the hospital at night during residency, while unveiling a new cooking experiment for dinner, or driving through the mountains with friends.  I felt like I could conquer anything, do anything, figure anything out.  Then somehow I lost that when I became a parent.

Which of these scenarios feels more familiar to you?

In the 1st scenario who was in charge?  Not me.  I was playing the victim in what felt like a soap opera.  How about scenario #2?  Who was in charge?  It was me.  The parent.  And I knew it.  I was decisive in my plan of what to say.  I was in charge and handled that exactly the way I wanted to.  And it worked to totally diffuse a charged and tense situation and ended in a big pile of laughs.

Both of these versions of the story happen in my house.  Now-a-days it is mostly the later.  Before I started getting coached and before I learned how to coach myself I often found myself feeling like I was a victim and that my kids (mostly my older daughter) were the bullies ruling the roost.  I was reacting.  I knew that I was supposed to be in charge and my wife and I were trying our best to act like the authoritative parents we wanted to be.  Explaining why.  Asking how she felt to get her to learn about emotions.  Being loving but firm.  Etc etc etc.  But we clearly weren’t doing it consistently enough or in a way that was getting us our desired result.

When I was complaining in my own head about what was happening to me I was acting like one of my kids.  I was not being an adult.  And I definitely was not being an adult parent.  For sure.  This is one of the most important lessons I’ve learned from coaching.  I am in charge of my own thoughts, my own feelings, my own behaviors.  And because of that I can determine ahead of time (usually) what happens in the end.  I can decide to channel the confident parent I know is in my brain somewhere and put her on stage.  I can choose to avoid the 3 year old having a temper tantrum elsewhere in my brain.  They can both exist.  I’m just choosing intentionally to display the mature one.  I don’t always.  If I choose the immature one then I always regret it.  And then the next choices are forgiving myself and cleaning up the mess I just made.

Parenting is a major learning process.  It is a journey for sure for everyone.  Sometimes we’ll show up with our A game and sometimes we won’t.  But if we don’t we always have the choice to love ourselves for being the perfectly imperfect humans we are and to move on.  Let’s do this!  If you need help along the way there are lots of great parenting and coaching resources out there.  Look for the ones that resonate best with you!

Emily Shaw, MD is a life coach for physicians.  She can be reached at emilyshawmdcoaching@gmail.com, on the web at www.emilyshawmd.com or followed on Instagram @DrEmilyShaw.